Technology and Solving Problems are my passion. I'm a South African that loves my wife, life, and coding.

Buy it now on Leanpub

PHP: The slums of the Programming World?

I presented this at Tech4Africa 2013. The slides can be found here.

PHP was initially created by Rasmus Lerdorf when he got irritated by repetitive coding of CGI calls. He consolidated a number of functions into a C library and created a parser which would call these functions out of HTML. And so PHP was born! Versions 2 and 3 were formalizations and extensions of the libraries, still using Rasmus’ parser.

The Zend Engine replaced Rasmus’ parser for version 4, introducing OOP capabilities, and in Version 5 Zend Engine 2 was introduced. Recent versions of PHP saw even more improvements, most notable namespaces in 5.3 and a built in web server and traits in 5.4

There’s no ideology or design philosophy, except that it should be a simple tool to solve problems. 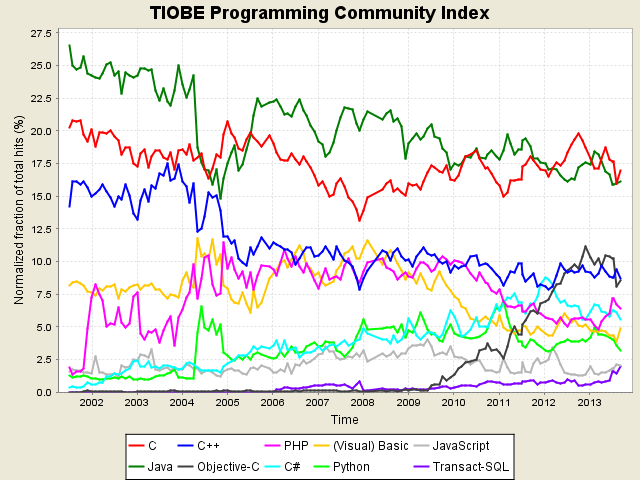 Despite a worsening reputation, the language hasn’t decreased in popularity. 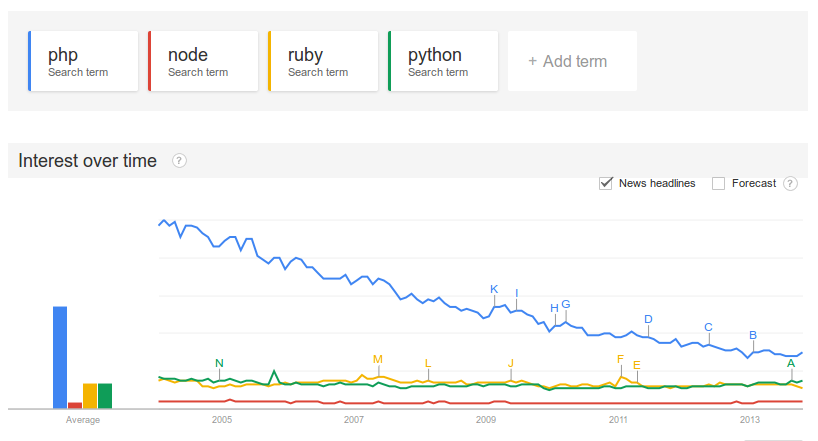 Less searches are being done for PHP. 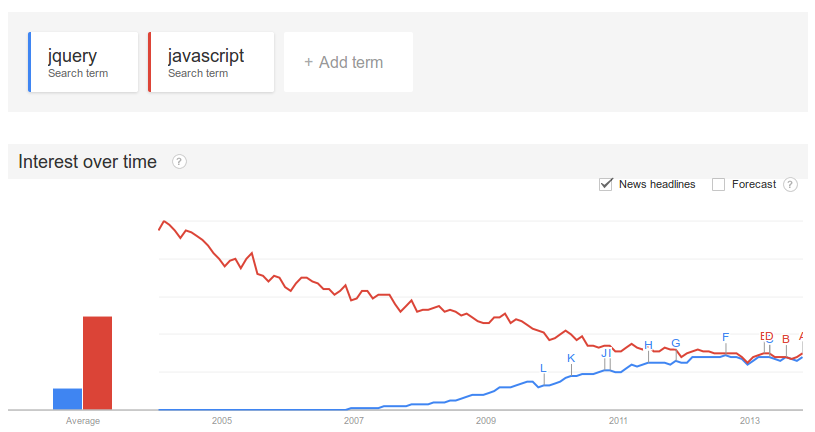 If you look at the JavaScript vs JQuery trends, JavaScript is also decreasing, but JQuery is increasing. It seems like the programming community is realising that frameworks are a good idea. 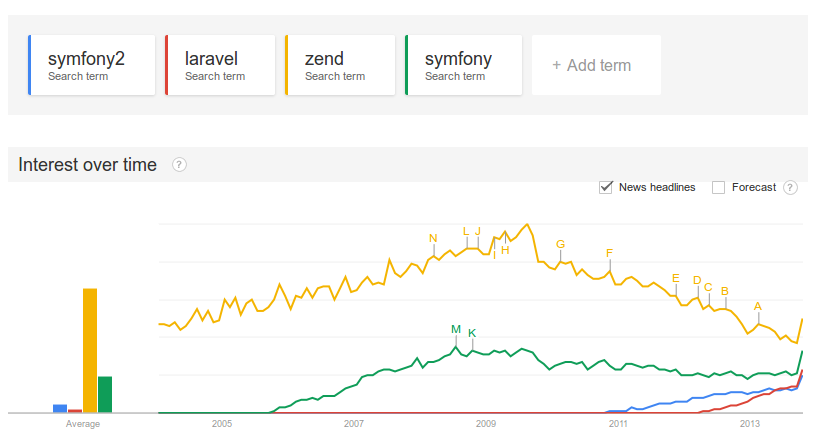 So if you look at PHP frameworks, searches on them are also increasing, especially after 2013 when Zend 2 and Symfony 2 were released.

No shortage of hosts offering PHP.

PHP accounts for only 18% of applications covered by the CVE, but accounts for almost 29% of the vulnerabilities

It’s developed a bad reputation in the programming community:

Bringing a knife to a gun fight is like bringing PHP to a modern web stack.

No unified community. In general, the community is great. In the rare cases where the PHP documentation (or even the language) is insufficient, you can usually find something of value in the comments. Yet, there is a lot of conflict in both the official (like PHP internals) and the unofficial (like PHP-FIG) communities.

If you look at the debate on what to use for indentation, tabs vs spaces, the community is in total disarray. 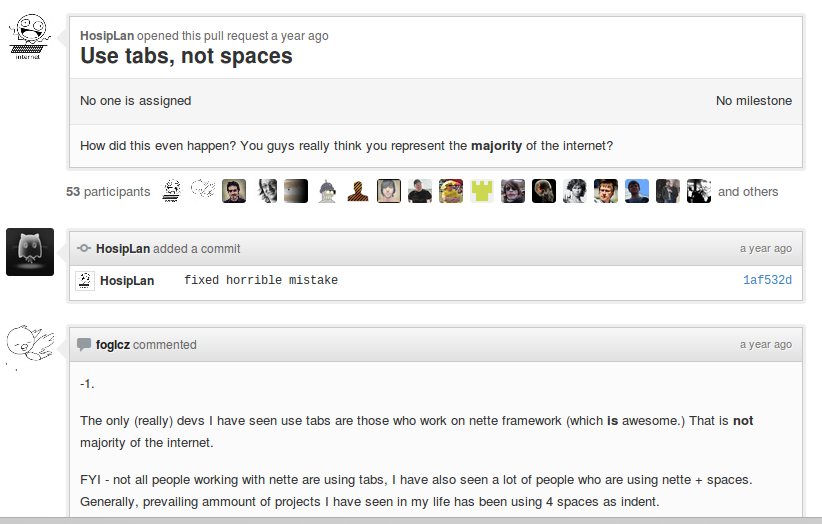 So you can do Object Oriented Programming as well as Procedural and Functional Programming in PHP (especially PHP 5.3 and later).

See you on the flip side…

PHP 5.3 is for me a watershed version on PHP’s history - It introduced a number of features / capabilities that made it possible for some of the other factors I’ll mention to come into existence. The most notable feature is namespaces, making it easier to name classes in a sane way. A lot of people welcomed the introduction of lambda functions and closures.

I think the PHP developers and community realized that PHP was becoming outdated and had a lot of valid issues that needed to be addressed. For me 5.3 was a definite step in the right direction. It introduced (amongst other things):

Although it seems to generate a lot of conflict, the PHP-FIG has managed to at least get the different frameworks talking. It’s an unofficial (as in not sponsored by PHP) group formed by various frameworks and projects whose aim it is to get the projects talking and to find ways to work together. It’s not always plain sailing, but it seems to get to valuable decisions. Eventually.

Composer is a tool to manage dependencies for a project, and manages and installs dependencies on a per project basis. Very much on par with node’s npm and ruby’s bundler. Packagist is a repository for composer packages and makes it dead simple to find a package / library that will address your specific need. Before this, we had PEAR, but that was usually a headache to set up and version properly locally, not to mention on a shared host. Now it’s as simple as doing

To a certain extent the improvements in PHP 5.3 and some of the work from PHP-FIG made this possible, although composer could have existed without them.

The combination of PHP 5.3 (specifically namespaces and proper OO support), the work of the PHP-GIH and the development of Composer made it possible to not only create frameworks such as Symfony2, Zend2 and Laravel, but also to reuse components from these frameworks in other projects. Drupal 8 uses a lot of Symfony2’s components. PPI is a framework built using both Zend2 and Symfony2 components. You can now easily choose and combine libraries without having to manage class names or dependencies. This has at least two direct advantages for project developers:

So, Slum or Diamond in the Rough?

My opinion is, there is no right answer. To a certain extent, PHP can be described as a horrible language that makes it very easy to introduce bugs and security issues. It doesn’t give you guidance on how to do anything, and can’t seem to decide if it’s procedural or object oriented. In the same breath, it gives you a lot of freedom to code according to your style, and makes a lot of common coding tasks very easy to do. Successful business have been built and are still running on PHP.

If you’ve never coded anything but PHP and have no formal programming education (including good programming books), you’re probably coding crappy PHP. Probably. I’d suggest you start reading up on good programming practices, start reading code that’s of a high quality, and start learning other programming languages, especially stricter ones like Java, or start using frameworks such as Symfony2 and Laravel that at least guides you in the right direction. Speaking multiple natural languages keeps your brain sharp and young. Coding in multiple languages makes you a better coder.

If you can pull it off, you’re badass as hell, but most of the time you’re only going to end up stabbing yourself.